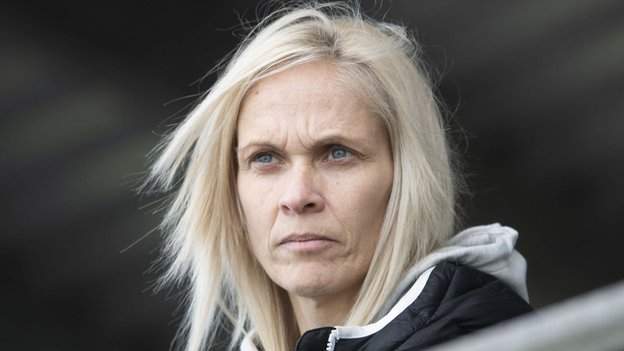 Shelley Kerr has urged the Scottish FA to include a woman in the new Scotland management set-up when they appoint her permanent successor.

Kerr, who stepped down after failing to qualify for the European Championship, thinks the SFA have a duty to continue to develop female coaches.

Kerr cited the work done by predecessors Anna Signeul and Vera Pauw, with Scotland being managed continuously by a woman since 1998.

“We always spoke about succession planning and developing females,” Kerr told BBC Sportsound. “I’m a great believer – doesn’t matter about gender, it should be the right person – but I do think there’s been extensive work to develop female coaches in Scotland so somewhere in that coaching staff I think there should be a female.”

Change ‘best thing for me and team’

Scotland made it two major finals in a row, with their first World Cup appearance in 2019, and they were on course to make the knockout stages with a 3-0 lead against Argentina.

However, a late collapse meant Argentina secured a 3-3 draw and controversy surrounded the fallout from the campaign with Kerr admitting she would “do things differently” after players were reduced to tears at a meeting the day after they were knocked out.

The Scots’ hopes of a place at Euro 2022 were dashed following a defeat by Finland at Easter Road earlier this month.

Kerr stepped down before Christmas to let a new manager have a fresh start, but said her time as Scotland boss was nearing an end anyway.

“Everyone was bitterly disappointed with not qualifying because the expectations have been raised having qualified for two finals [Euro 2017 and World Cup 2019],” she said.

“For me now it’s the right decision. The team needs someone fresh to move them forward.

“Personally, I’m disappointed because I wanted to see the team at another finals and the players did as well. But it’s definitely a time for a change. It’s the best thing for me as an individual and for the team as well.

“In 2017 when I took over from Anna and I signed a four-year contract, I always said that regardless of what would happen I would stay my four years and that would be it.”

Kerr wants a job back in football, but laughed off suggestions she would be in the running for the vacant Kilmarnock post.

The 51-year-old said: “I want to be involved in football, I feel I’ve still got a lot to give, but it’s getting opportunities as well.

“I think, long term for me, I would like to go down the sporting director route, I’ve never hidden the fact I’m really ambitious, but it depends what opportunities are open and I’m open to anything.

“I think leadership positions for females is getting better and better and I hope it happens in football. I still think we’re in an era where it would take a brave board to make those decisions.”